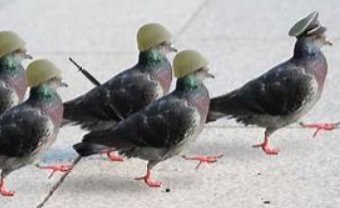 Pigeon RECON Force
By Daniel Linhardt
Pigeons are attacking our St. Anne campus, and you need to keep a close watch your lunch. These criminal birds are committing food theft  all over our campus. We have interviewed numerous victims of these heinous criminals. Caden Frost has had his lunch stolen around three times. He says that the pigeons are annoying, and their thefts have left him hungry for the rest of the day. We  also have a hero on our campus. Seventh grade teacher, Mrs. Meek, saved a lunch from a pigeon strike. We all should look at her as a role model for our school’s air defence system. We must all work together stop this gang of hooligan birds that is pillaging the lunches of our beloved St. Anne students. Band together with your friends and fight back! Chase them away from our food and scare with loud noises to keep them from ever coming back. Also, don’t leave any food scraps on the yard.  Leaving food out is like a welcome mat for these winged hooligans. If we throw our uneaten lunches away in the compost bins, there will be nothing to attract these villains. Do us all a favor and clean up after yourself in the yard. Together we can win this great war against the pigeons. 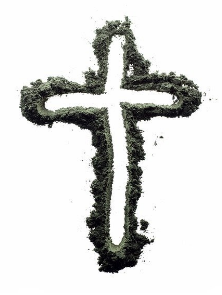 As the month of February wraps up, the Lenten season is approaching. As the shorter portion of ordinary time comes to an end, the Christian community is preparing to celebrate the death and resurrection of Jesus. As the kickoff of the Lenten season, Christians are encouraged to give up at least one thing during Lent. On the other hand, a Christian could do something to improve the lives of themselves and the lives of others around them. This is to represent Jesus’s sacrifice for us. Also, for the season of Lent, Christians do three main things: pray, fast, and give alms. Praying, as the Bible says, is best to be done in private, as God can hear your prayer even if others don’t. Fasting is commonly known as not eating or giving up something, but it is more than that. Fasting can be a way of people doing something extra to improve themselves. Nonetheless, fasting can be a way of giving up something. The goal is to reflect on what we are given and to reflect on how Jesus went into the desert for forty days. Lastly, almsgiving is a way to give to those who are not as fortunate as us. If we give people what we have, we can live in a more harmonious way. Lent is a time of reflection, and the more people reflect, the more holy the catholic Church will become as a whole. On February 26, St. Anne School attended the Ash Wednesday Mass. The ashes that were blessed during the Mass were the ashes of the palms from last year’s Palm Sunday. The Mass is the start of the Lenten season, and everyone at school is ready to reflect just as Jesus did.

7th and 8th Grade Confirmation Mass
By: Caroline Zheng
On Sunday, February 23rd, the seventh and eighth graders had their Sacrament of Confirmation. They did really well on the mass and completed their next step of being a Catholic. Confirmation is a Sacrament in the Catholic Church in which the one who is confirmed receives the gifts of the Holy Spirit through the imposition of hand and anointing with oils by the bishop. It’s considered a sacrament of initiation which means that it brings you deeper into communion with the Church.
At the beginning of the Mass, the candidates walked in with their sponsors. They all sat in the front rows with their families and friends. Everyone that was confirmed took  part in the mass. Some candidates served as the greeting, prayers of the faithful, or did the readings. Later as the priest called their names, they stood up one by one and renewed their baptismal promises. Then the Candidates with their Sponsors walked  to Bishop Walsh. He anointed them with the holy chrism. As the Bishop called the candidates by their saint name and said, “Be sealed with the gift of the Holy Spirit.” The candidates replied, “Amen.”
Overall, the junior high successfully completed their Sacrament of Confirmation. Confirmation deepened and strengthened their relationship with God and left an indelible mark on their souls  just like during Baptism. 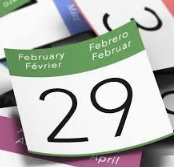 Every four years, a leap year happens. A leap year is when we have an extra day added to the end of the month of February because it is the shortest month. This day is added as February 29, or leap day. This year we will have 366 days instead of the usual 365.
The reason leap years happen is that the actual time it takes for the earth to orbit the sun is 365.2421 days. The extra 0.2421 days each year (5 hours, 8 minutes, and 4 seconds) adds up, and after four years, this accumulates to around 24 hours, enough for one day. Doing this sorts out the difference between the lunar calendar and the solar calendar. If we didn’t have this system, each calendar year would be off by about 6 hours. Consequently, our time would go astray from the topical year and get increasingly out of sync with the seasons. After a century, 100 years, we would be off by 24 days. If you allow this to happen for a while, eventually, we will be celebrating Easter in winter and Christmas in summer! Luckily, we have leap days to fixe that problem. During non-leap years, like 2019 for example, the extra part of the day is not taken into account.
Leap days were first added to the Julian Calendar in 46 B.C., by Julius Caesar. In America, we use the Gregorian calendar.  Christopher Clavius, a German mathematician and astronomer, figured out where to add the extra day in our calendar in 1582. The next leap year will be in four years, 2024.

Student council report: 2020 and Beyond! By: Mikey Dea

New year, new responsibilities! At the beginning of 2020, the Student Council has been very busy. Although it has already passed, their main focus going into the new year had been Grandparents’ Day, the day that all the grandparents who were able to come to our school to have a good time.  The grandparents ate lunch and learned more about their grandchildren’s lives at school. The president and vice presidents worked hard to write a speech about appreciating our grandparents, religious affairs wrote a prayer and blessing for the grandparents, and spirit made a cheer for the grandparents. “We really have just been working on speeches and cheers that we thought would make both the grandparents and their grandchildren happy,” says Max Truong, the student body president. On the day of the event, their efforts were absolutely successful.
Apart from Grandparents’ Day, the Student Council has also decided to try and better organize the bake sales. To do this, safety was thinking about possibly putting up indicators to form lines that go to specific treats. By doing this, they hope to provide a less hectic experience for the rest of the students yearning for a sugary snack or beverage. “ We hope that with the addition of more organized lines, bake sales will be a lot more enjoyable for people looking to buy their treat and move on with their day,” says Kayla Fong, one of the commissioners of safety.
Finally, the vice presidents say that the intramurals are going well, and they are seeing more participation. “ I think the other students are really enjoying being able to play some of the sports and activities they sometimes do in P.E or in their free time at school,” says Ian Dunn, the boy’s vice president. 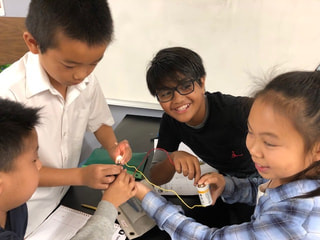 In the last two months, the fourth grade has learned and done many things. In science class, they are making circuits, and the fourth graders say it’s thrilling. In math class, they are learning how to multiply one-digit numbers and are learning how to estimate. In English, they are learning homophones, which are words that are spelled differently but sound the same (such as sea and see). Additionally, in history class, they just finished learning about ranchos and missions such as Mission San Jose, Mission San Francisco de Solano, Mission Santa Barbra, and more. You can see their great mission projects right outside their classroom as well. They worked very hard on them for about two to four weeks. In reading, they are on the subject of fractured fairy tales, fairy tales, and tall tales. They will also be writing their own fairy tales and making a book soon. The fourth graders have also been preparing for the open house on February 2nd. Aside from all of their hard work, the fourth grade will get to have fun on their next  field trip to the Walt Disney museum and Pioneer Museum, which are both located in the Presidio in March.
In the Science room, there are many things happening this month. Currently, the biggest event that is taking place is the Science Fair. In the Science Fair, 7th and 8th graders test their questions to find new and unexpected answers. On January 31, they will be judged in the fields that they tested. There are three main categories: Physical Science, Biological Science, and Social Science. In Physical Science, the questions are typically about the way objects move and interact with one another. In Biological Science, the common questions are, “How do different types of fertilizers affect plant growth?” or “What is the optimal amount of water for plant growth?” Below the science fair, students in the 6th grade are studying weather and heat transfer. They are looking into the climate of regions and how they affect life. The 5th graders are working on the ecosystems and how life exists as a community out in nature. In the 4th grade, they are doing an activity quite shocking. They are learning to understand small circuits and buzzers by harnessing the power of electricity. The Junior High is working on some interesting topics as well. The 8th grade is learning about how our solar system was created, along with the rest of the universe. They learned about the Big Bang Theory, the effects of gravity, and the way stars create light. The 7th grade, on the other hand, is learning about chemical reactions. In order to conduct the experiments, they mix chemicals that generate heat, new colors, or even light. Sometimes, a precipitate is left behind, which is the solid waste after the reaction. “It was really fun,” says Jack, a 7th grader. “It just smells so bad.” The science classroom is bursting with action, and the skeleton is always welcoming you to come down.