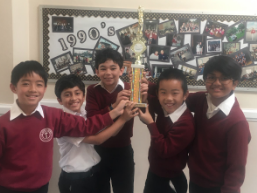 4th Grade Champions!
​                                  By Samantha
Swish!  Congratulations to our 4th-grade boys’ basketball A team who won the Championship game  for division 3. The team is a mix of St. Anne students and a few AFY students. They all worked well together and pushed each other throughout their season.  The boys had a great regular season winning all their games and taking championships was a great way to wrap up the season.
The Stars played Salesians and won the championship game 32 to 22. “It was a nerve-wracking game,” said Dash. The game started off close, and the boys were still warming up and shaking off their nerves during the first quarter.  The quarter ended with a score of 4 to 6. “It was scary after the first quarter because we were down by two,” said Aeshaan. However, they started picking it up during the second quarter, and the momentum slowly began to shift to our side.  Dash even had a buzzer-beater shot to end the half. St. Anne went into the third quarter with the lead of 14 to 11. After gaining their confidence back, they came into the third quarter strong. Determination filled their heads and aggressiveness and competitiveness were contagious throughout the team.  Everyone wanted to win and they weren’t going to let up. They kept the lead going into the fourth quarter, and the score was 20 to 16. During the fourth quarter, the momentum was all on our side, and the boys made basket after basket. They were cheering each other on because they wanted to finish the game strong.  Everyone was having fun on the court and the parents were cheering happily for the team. Finally, the game ended with the score of 32 to 22. All in all, this basketball season was a lot of fun and everyone enjoyed playing with each other. “Our coaches are great, we had a great season,” said Josh. “We’re awesome!” said Aeshaan. ​ 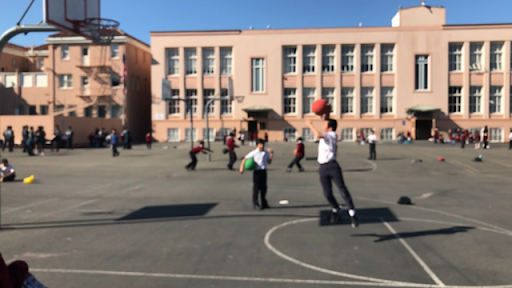 This year’s 2020 NBA all-star weekend was amazing. One of the big events  was celebrating Michael Jordan’s historical dunk. Last time the all-star game was in Chicago,  Michael Jordan leaped from the free-throw line fifteen feet to the basket ! His vertical jump was 4 feet. He jumped so high that his head was 6 inches above the rim. His feet would be at the same height as the other players’ heads! His vertical jump was 20 inches above an average NBA player’s vertical jump. Michael Jordan got a 50/50 on that dunk. People were astonished by this amazing dunk, and the judges almost fell out of their chairs. We had some of our very own St. Anne’s students attempt this dunk! Look below for more. 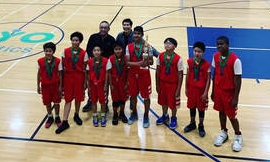 During the final seconds of the game, the stands were going wild. The St. Anne’s 6th-grade basketball team was about to win a game against St. Paul, their main rival. Before, they had lost against them every time they played each other. This game, however, was going to be different. The Stars were not going to lose this time. This was also not like any other game because it was the championship, and the team had set their minds on winning. They were more aggressive and had learned from their last few games. As the game started, the stands were full of excitement. During the first quarter, they started off by taking the lead, 10 to 4.  The game was off to a good start. After the 2nd quarter, the entirety of the stands was cheering. The two teams tried to outplay each other, both of them hoping to win the championship game. At the end of the game, the score was 40 to 34. After losing to St. Paul’s team twice, the Stars had finally won. After an intense rivalry that spanned across 3 games, the 6th-grade team pulled through with a victory. However, the team was extremely tired and had fought their best. The other team fought well, but the Stars had fought harder than them. The coaches and the rest of the team won their medals and the championship trophy. After all, according to one of the parents, “The third time’s the charm!” Afterward, there was a celebration and many pictures were taken.